A week ago today the annual Engage conference started in Rotterdam, on one of the most amazing conference venues I’ve been at so far, the ship SS Rotterdam, which is a permanently moored hotel ship in the harbour. Theo Heselmans put on a stunning conference, where over 400 people attended. They were IBM Customers, end users, IBM business partners, members from other user groups, people from IBM and I’m sure there were other representatives as well.

As a part of the Brainworker consultant pool, I was treated to this trip by Arne Nielsen, who footed the bill. We did a road trip from Norway to the Netherlands, via Sweden, Denmark and Germany both to and from the conference. It was a nice trip, but I think we will fly next year…

I also did a presentation at the conference called “30 tips about IBM Verse.” I was so nervous that nobody would come, but it turns out I got a full room with 50 people. And the feedback was great.

Milan Matejic wrote: “Nice Session for everybody who plans to use Verse Client on a regular basis. Packed with lots of information delivered in a funny and energetic manner.” Aww! Thanks!

IBM presented a lot of things around IBM Notes/Domino v10 and v11. I’ve written about most of the Notes 10 stuff in this blog posting, but I will mention the new stuff they presented at Engage about 10:

The first beta of Notes/Domino 10 will be out in June, and the second one will be out in August. We did get to se the new Notes 10 client, and I was severely disappointed. It looked just like V9, but Feeds, OpenSocial Component and Composite Application Editor will be removed. This an attempt to make the client lighter. It also stems from customer feedback that almost nobody was using these features of the client. You can also change the colours of the client in totally different ways than before, but a visual impression is so important, that I really wish the design of the client had been changed.

Notes/Domino v 11 will be out already next year. That version will have a much tighter integration with Active Directory, so that you will be able to create Notes users in AD, and then they will be automatically created in Domino Directory as well. Another vision for Notes/Domino 11 is that of low code. It will be even easier than it is today to set up applications, both for mobile, web and the client itself.

Also, the Domino Designer might get killed off, so that you can the Visual Studio Plugin for coding instead. The idea is that anyone should be able to code a Domino based solution, without much, if any, knowledge of the Domino platform. With new and improved APIs they will be able to read from and write to Domino. Personally, I hope they also get rid of Eclipse.

It was also revealed that over 200 developers (TWO HUNDRED) were working on the next versions of IBM Notes/Domino. And at one of the presentations, the lead developer agreed with me that Xpages had been a blind alley. Thank you! I’ve been saying that for years. And:  There’s no end of life date for Notes/Domino.

There was also talks about IBM Domino in the cloud. You can already today move your Domino applications to the cloud or run them in a hybrid environment. This will be made even more easy in the future.

Phew! That was quite a lot about Notes/Domino 10 and 11. What else did we learn?

Watson Workspace is something IBM is pushing really these days. They have already made templates for various types of businesses, that will make it easier for organisations to have spaces where teams can collaborate, and have their data analysed in ways that will make it easier for you to make quick business decisions. At least that’s what IBM says. It can also be integrated into IBM Connections Cloud. Contact your local IBM sales person, or partner, to give it a try.

I also attended a few sessions where organisations did presentations on what they are using IBM’s Watson technology for. I especially liked Margo van der Stam’s presentation about what the Dutch tax office is doing by automatically processing letters from the public. It was very interesting to hear about the challenges they have by making the automatic process recognise things like addresses, censoring the names of the sender and decide on the right cause of action. It’s all still in being developed, so there is a manual review as well.

I also saw demos on how to make scripts and customise the templates so that you can add your own actions that you can trigger Watson to do. It is a very promising technology.

The sponsor room was great, with a constant stream of food, snacks and drinks. It was also nice to talk to several of the business partners and sponsors about that they could offer for Office 365, Notes/Domino and IBM Connections.

And speaking of IBM Connections. There was nothing announced about Connections. Less than a year ago at Social Connections in Vienna, it was all about IBM Connections Pink. Now? Quiet. The only times it was mentioned was whenever IBM denied they were only thinking about cloud customers, or when it came to integrating IBM Watson Workspace into communities in IBM Connections.

In addition, I attended a couple of sessions about how to leverage your Notes/Domino data by using various types of technologies and development platforms. Especially Paul Withers talk about Node.RED and the Domino APIs was great. I’ve worked way too little with stuff like this and should really get my act together.

The people that you love

And that was the technical stuff. Another important part of the conference is the social bit. On Tuesday the sponsors and speakers were pampered to a great dinner, with tribal drumming and didgeridoo playing, on the deck of the SS Rotterdam. In beautiful weather, I might add.

On Wednesday Theo took us speakers, as per tradition, on a secret tour. We started the evening at the Dutch Pinball Museum and ended up with a dinner at the Euromast tower.

The next morning Arne and I drove back, and thanks to lots of road construction work on the German Autobahn, we weren’t home in Norway until 3 in the morning. And I had to be at the train station at 04.20…

Once again, Thanks for a great conference, Theo. You give us other user groups something to really strive for! And thanks to all the attendees, especially my fellow IBM Champions and the other speakers, for helping to make it great. See you all next year!

You can see my entire photo album from the conference here: 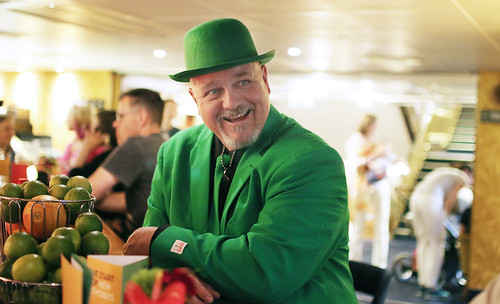 1 thought on “I Became Engaged Again”