On August 15th and 17th this year, Di Derre and KORK played three sold out gigs at the Frognerseteren (former mountain farm) at the top of Oslo. I photographed the very first gig, so that I wouldn’t be in the way of the cameras filming the gigs on Saturday. I love shooting this band, and adding an entire symphonic orchestra only made it even more fun.

Rarely have I sold so many photos from one and the same gig as from this one. The Norwegian Broadcasting Company (NRK) bought photos for the promotion of their broadcast of of the show (which was seen by 705 000 Norwegians, they are after all one of the biggest bands in Norway). Several newspapers that wrote about the  gig bought photos as well, and the people running Frognerseteren, as well as the orchestra, wanted copies too.

Shortly after this I was asked by Di Derre if I could choose my favorite photos, so that they could use this as the cover photo of the live album they wanted to release from the gig.

And that’s how the above photo ended up on the cover, that you can see above. The designer of the cover has played around with my photo, and I love the result. Especially the STEREO sign at the top. The back cover looks like this (click on photo to see a large version):

I took that photo as the band took their bows, together with the orchestra. I also shot a lot of photos from the entire event, and several of these are on tine inner sleeve (click on them to see them in a large format):

The album will be released on Friday 1st of November, and there are several great musical moments on it. They do sing in Norwegian, but if you are Nesbø fan, you might be persuaded to buy a copy? If you do, buy the LP. You get a wonderful cover…

If you want to see my full photo gallery from the concert, you can click on this photo album and see them all: 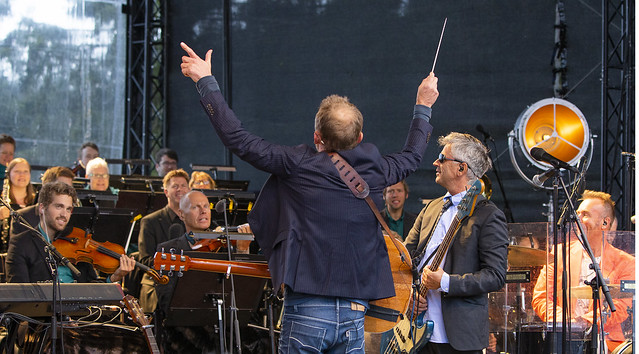