The superlatives and positive messages about the Norwegian user group’s (ISBG) launch of IBM/Notes Domino V10 in Norway yesterday has been pouring in all morning. As the leader of ISBG, this makes me immensely happy. And it gives bright hope for the future, and we will use this momentum when we’ve now started preparing for the spring seminar. Read on to see what happened at the launch!

IBM really came through and helped us prepare for this event. They also were present with 6 (at times more) people during the entire conference. We also had a yellow carpet, yellow balloons, yellow carrot cupcakes, yellow T-shirts and yellow slides.

I wished everyone welcome at 09.00 and spent ten minutes going through the agenda, as well as ISBG’s plans for the future. We announced that we will start doing the webinars again from January, and ISBG is also working on creating a Nordic user group. We will also send out a survey to our members to get feedback on what kind of activities they would like to see in the future.

We also announced our spring seminar on June 4th and 5th. However, I learned last night that DNUG (the German user group) will take place on those dates. We will look further into it.

I also announced that I would hand out Domino V10 t-shirts and #dominoforever stickers to those of the audience who asked good questions during the conference.

First man out was Uffe Sørensen from IBM. He gave a talk about the strategy for Domino in the future. He also explained IBM and HCL’s roles in all this:

IBM will still sell, market and do support for Notes/Domino. There will be no changes around how you buy licenses and ask for support. HCL, on the other hand, are doing the development. Today they have over 300(!) people working on development of the platform. HCL are also free to use the Domino platform for launching their own competing products, something they have said they will do.

Uffe’s main point was that after five years of no commitment to the platform, IBM is now serious about Domino as an application platform and looks upon it as a product with a great future.

Thomas Hampel from IBM now showed us Panagenda’s Application Insights, which makes it possible for you to analyse your Domino environment. You can then see:

Application Insights is included with your Domino license!

He then explained why you no longer have to depend on Domino developers when it comes to developing solutions on Domino. With Node.js and the Domino API, you no longer need to worry about where the data is, nor the Domino platform per se.

Karl Dettner and Anders Kjellner from IBM then gave us demos of a whole bunch of Domino applications to show the power of Domino V10. Among the demo apps were:

Thomas Hampel then took us on a tour through all the new functions in Domino V10 and the Notes client. You can read Thomas’ presentation here!

– We didn’t come here for the food!

But eventually lunch commenced, and IBM had bought great food for us. During lunch we had discussions, points of view where shared and we generally socialised. Several business cards exchanged hands as well.

After lunch we had some bonus contents for the people who came to the conference. Maria Nordin from ISW told us about the Kudos product portfolio that ISW delivers for the Connections platform. These are:

Maria gave a demo of Kudos Boards. Several of the attendees were already customers of Kudos Boards, and we had a nice discussion about functionality that’s not in the product, plus things that are a bit hidden. We also got a demo of mindmaps, which is also now a part of the Boards.

After this I gave a demo of IBM Watson Workspace, to show that this is a Slack like client, but with video conferencing possibilities, as well as the Watson technology which gives you assistance in sorting out all the noise.

Here we took a little break from the agenda, because we wanted to give Renée Iselin Kleven of IBM Norway a token of our appreciation. Not only has she really worked hard for us in ISBG, she’s also gone above the call of duty for ICS customers in Norway. Unfortunately she’s no longer with ICS and we wanted to give her a nice sendoff in the form of flowers and a bottle. We will be keeping contact in the future as well.

After this I demonstrated how you can use OneDrive and Sharepoint inside a Connections community. I did this to show that there doesn’t have to be a contradiction in using both Office 365 and Connections in the same environment. You can create an environment to suit your needs.

Connections has a lot of functionality for collaboration that Office 365 doesn’t have. So by mixing them, you get the best of both worlds.

I also showed a table where I compared the functionality of both products. You can see them in my presentation here.

Last man out was Emmar Hoel from IBM Norway. He did a very interesting talk on security. What are your biggest security holes? How does IBM measure the level of security in your organisation?

You can read more about IBM Security here.

And with that, it was over. For now… I thanked everybody for turning up, and my message was clear: Domino will in the future be an application platform you can use seamlessly with other platforms and products. Therefore you should forget about expensive migration projects.

I also shared links to the following resources:

See all the photos from the Domino V1o launch in Norway here: 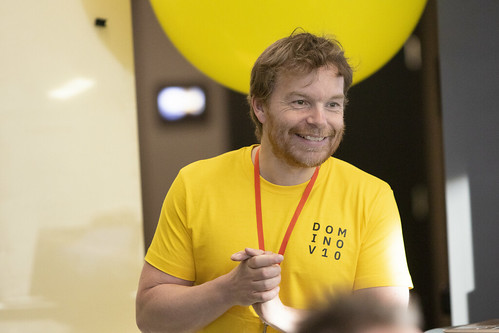 What do you think of this posting? Anything you wanna ask about? Leave your comments below!